Unless you’ve been lurking in a sewer somewhere, you know that It opened up in theaters last weekend to resounding success. Yep, the tale of the demented and child-terrorizing Pennywise the clown that lives under the town of Derry, Maine shot to the top of the box office, smashing records along the way.

Now, if you haven’t been lurking in a sewer somewhere, it’s time to ask yourself just what would Pennywise have to say to get you down in one? Here are some of the answers that, like Georgie’s boat, have been floating around the internet. 4. I’d go even if it was just the crappy quality leaked one. 5. Everyone needs a backup option for when the person whose login they have doesn’t have unlimited screens. 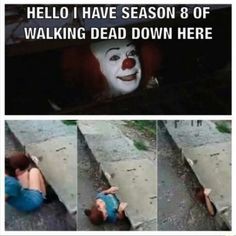 8. I would have gone in a heartbeat for textbooks as well. 9. What show would you crawl into the sewer for? A Twitter user also asked people “What Would Pennywise Have to Say To Get You To Go Down There?” and the results were again, classic.

“I’ll pay off your tuition” RT @MotherOfIncest: What would Pennywise have to say to get you to go down there? pic.twitter.com/1ZTSSvk5oX

pennywise (from the gutter) heya, would you like a-
me: [i’m already in the sewer]

Pennywise: Yo come down if you wanna die-

Pennywise: “I have the stingray who killed Steve Irwin down here”

Pennywise: I have nothing to offer you I just wanna kill and eat you lol

15. And here’s a reverse situation just for good measure!

Pennywise: “Hey I got your ex down here”

‘It’ Had the Biggest Opening Weekend for a Horror Movie Ever