This column was originally used on my blog I Am Geek but I wanted to share it here with you guys too. I’m selfless that way.

It really hasn’t been the best of times to be in Marvel public relations. Over the last week or so there have been some really interesting comments coming from the House of Ideas and they have not been received very well. It all started when, describing the decline in Marvel comic sales, senior vice president of sales and marketing, David Gabriel, had this to say-

“people didn’t want any more diversity. They didn’t want female characters out there. That’s what we heard, whether we believe that or not. I don’t know that that’s really true, but that’s what we saw in sales.”

Ugh. First off the wording of this is beyond poor. I mean, how many people are you looking to piss off with this statement? Telling the general public that the sales of your comics are down because fans don’t want female characters or diversity is ridiculously socially insensitive. For someone who deals with marketing and sales you have to wonder if there’s a better way to say that? Of course there is! Phrasing is everything (anyone else just think of Sterling Archer?) and Gabriel not only made himself look bad but the company. When you consider how much of a money machine Marvel is you’ve got to know that’s not going to be met with the best reaction.

But is he right? Have fans grown tired of female characters and diversity? The answer to that questions is easy. No, they haven’t. What fans have grown tired with is the constant reshuffling of the deck and massive cross over events. It seems that every six months or so Marvel is committing a huge shake up in the wake of some massive cross over event. There’s a term thrown around comic book circles called event fatigue, and I think David Gabriel mistakenly interpenetrated fans exhaustion to events and shake ups to diversity and dislike of women characters. 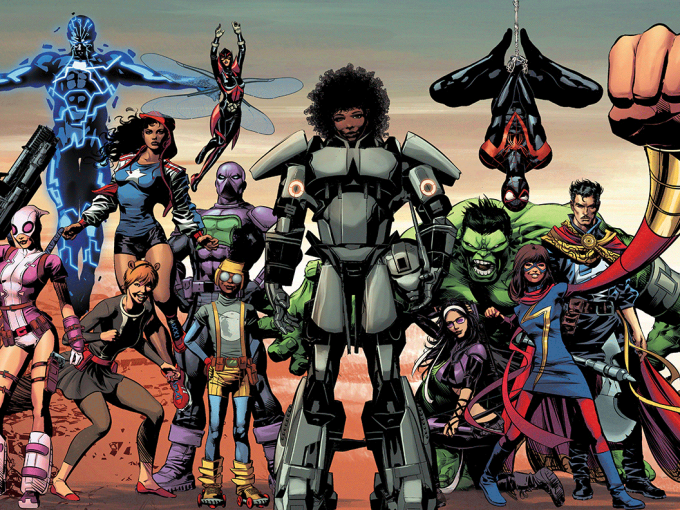 Over the last couple of years Marvel has continuously changed the status of its characters. For about two years now Thor has been a woman (Jane Foster), there is a African American Captain America (Sam Wilson) and Spider-Man (Miles Morales), their Ms. Marvel is a teenage Muslim girl (Kamala Khan), the Hulk is a young Asian scientist (Amadeus Cho), Iron Man is currently an African American teenage girl (Riri Williams), and characters like Luke Cage and Jessica Jones have seen a resurgence because of their respective Netflix series. Being an avid comic book reader I can say that I’ve read books with the majority of these characters and they are good books. In fact some of them, like Miles Morales and Kamala Khan borderline on great books. These characters aren’t the problem. Ms. Marvel was Carol Danvers before it was Kamala Khan and Sam Wilson isn’t the first person other than Steve Rogers to be Captain America. Jane Foster only became Thor because the Odin Son was deemed unworthy but she’s been a big character in that series. Hell, Loki has even spent some time as a woman. The writers of these books have taken these transitions and have upheld the structure of what has made these title characters so popular. I could understand if the books completely changed tone, but they haven’t. They have shifted to the dynamic of the new hero in the starring role while maintaining what fans love about the books. This is not the problem.

The problem is fans don’t want to commit to these characters because with all the constant shake ups in Marvel there is no telling how long they will be around for. It’s hard to tell what is a gimmick and what is a main stay. That’s where the frustration comes in. As a hard working fan why would you want to spend your adult dollars and invest time into a character if you can’t trust the company to repay you for your commitment? If you read a years worth of stories at $3.99 a pop you shouldn’t be rewarded with a seismic change that removes the character you fell in love with. There has to be some permanence and some stability, and Marvel has been seriously lacking that over the last few years.

Just look back at some of the major events of the last few years. There’s been Civil War II, Secret Wars, Inhumans vs X-Men, there’s the upcoming Secret Empire, and then there was the entire All New, All Different title line where Marvel openly bragged about the change in the status quo. I personally think that the diversity in Marvel is fantastic. I have an African American niece, and while she’s only an infant, I’m super excited about the prospect of sharing with her that Iron Man is currently someone who looks like her. That Iron Man is actually a her to being with. Or Spider-Man is an African American teenage boy. It goes to show that she’s represented in a medium that wants her as a fan. That’s fantastic marketing. Branching out to everyone opposed to just a select few. Fans aren’t tired of these characters, they’re falling in love with them and that’s the problem. Their love isn’t being rewarded.

David Gabriel, who suffered from some serious foot in mouth disease, confused diversity with fatigue. With impatience. Sales going down isn’t a reflection of the characters in the book as much as it is the direction of the company. Marvel did a tremendous thing by bringing in such a vast array of new, relatable, socially responsible heroes. It’s fantastic. Now they need to let these heroes sit. Allow them to stay where they are without any drastic changes. Let them build their fan base. Let them pull in new readers who are excited to see something like a Muslim hero. Let them be celebrated and loved instead of shuffling the deck every six months. Yeah, a change in status quo grabs a headline but it’s openly disrespecting your loyal readers who just want to invest in their favorite characters.

David Garbriel couldn’t have gotten it more wrong here. The problem isn’t with the characters it’s with the company and how they present these characters to be interchangeable and expandable. Why invest in something when you know it’s just going to change in six months? Fans are tired and fed up with events and that’s why your sales are down. Maybe you should listen to that fan outcry instead of shifting the blame.