Mayans MC is over halfway through its debut season and after six episodes it’s clear that even though the series takes place in the Sons of Anarchy universe, it’s quickly blazing down its own distinct path. Led by Kurt Sutter, Mayans MC has come into its own as a motorcycle drama that’s not afraid to touch on the current political climate and take viewers into worlds and stories they’ve never been before. The series may follow EZ Reyes (JD Pardo) as the young prospect of the Mayans Santo Padre Chapter, but over the freshman drama’s journey thus far, many key players have started to emerge – starting with Mayans Club President, Obispo “Bishop” Losa who is played by the captivatingly talented Michael Irby.

Joining the ranks of previous presidents including Ron Perlman and Emilio Rivera, Irby has quickly distinguished Bishop as a respected captain who leads with trust. While that trust may be misplaced for a few of his men at the moment, his time as an Iraq war veteran has resulted in a deeper sense of loyalty to his brothers than we’ve ever seen before. As president, the weight of any and all indiscretions of the club fall on his shoulders and Irby has taken on the leadership role flawlessly, earning the attention of both his club and fans whenever he’s on camera.

We got the chance to speak with Irby about both Mayans MC and Bishop and learned some great insights including his views on family, his favorite scenes to film, what it’s like sharing those tense scenes with Danny Pino, and just what to expect from that crazy Sons of Anarchy- inspired cliffhanger. Do yourself a favor and check it out below!

Fan Fest: First off, congratulations on getting a second season! What was the cast’s reaction to the renewal?

Michael Irby: Thank you, it felt great! And it happened sooner than later, which was very cool. We didn’t have to wait for months and months – it was such good news. It’s great to see all of the hard work pay off and to know that we get to keep telling this story is so exciting.

FF: The show has been extremely well-embraced by Sons of Anarchy fans and new fans are joining the ride as well. What’s been the most exciting part of the whole process for you so far?

MI: Well, being invited to play on the playground in the Kurt Sutter world. As an actor who’s been doing this for 20-odd years, sometimes it feels like you are born to play certain parts. It’s been fantastic to be embraced in that world. It’s a great group of actors and being part of a totally Latino project, that was a first for me. There are so many things that were exciting about this opportunity – learning to ride a motorcycle, putting on the kutte – it’s all been such a blast.

FF: You stepped into essentially the most powerful role of a motorcycle club as the President. Was there anything you wanted to do for Bishop to stand out from other Presidents we’d seen?

MI: I  think there was a way about Bishop where I didn’t consciously need him to be different from the other President’s.  We’re all being dealt different circumstances and the fans are going to be able to see through the course of this show a gamut of all these different characters. They’re going to be able to see things that may remind them of Clay or Alvarez, but for Bishop, he’s dealing with so much right now. He’s dealing with a rat possibly inside his own club, the pressure of having to prove himself to his cousin, and then there’s the cartel. So, I wouldn’t say I’m consciously trying to make him different – I’m taking him throughout this process in his own unique way.

FF: As President, you get to share scenes with a lot of different characters, but you have especially great chemistry with Danny Pino who plays Galindo. What’s it like working with him during those intense scenes? Typically, there’s some sort of gruesome torture going on right behind you as well.

MI: I really like Danny as a person and then when I get the opportunity to play with him as an actor, it’s so nice. I think he’s doing a fantastic, knock-out job with Galindo. The way he’s playing it and the way that character has been written, I look forward to hopefully years and years of working with him. It’s always great when there’s a steak on the table and you’ve got two big dogs looking at it, and sometimes as an actor that’s how you have you approach scenes. Never to outdo anyone, but to share in that process and let all of us live in these extraordinary circumstances. I mean scenes like watching a guy get his arm chopped off,  it’s a lot of stuff that people don’t get the opportunity to see.

FF: Anytime you guys are down there and someone on that pew I just go, “Oh no, what are we about to see?”

MI: I guess you can find a little salvation there on the pew. You know, either good or bad. There’s definitely a transfer.

FF: Over the past few episodes, there’s been stories both in place and being put in motion for Bishop. One thing that stuck out to me was Alvarez alluding to EZ that Bishop’s approval of his brother sponsoring him in the club as being unconventional. Why do you think Bishop gave it the okay?

MI: I think there was something he was able to see in EZ that might have even preceded and gone beyond words – that Angel was trying to help out his brother. Bishop brought in Angel at a dark time in his life. So, for his brother and someone in the family, Bishop was able to understand that once you get those strikes against you and you go away for a felony, it’s incredibly hard to get back into society. So, I think for the sake of the family, Bishop was able to look the other way. He also said, ‘I’m not going to babysit him. You keep your eyes on him. If he can’t step up, then he’s gotta get out of here.’ He has all of his faith in Angel.

FF: Faith that may be a little misplaced at the moment.

MI: He has all of his trust in him. When Bishop brought him in, he’d never even think that Angel would ever be going behind his back as he’s doing right now, but as he’s coming to find out, the idea and the intent is that it’s for the sake of the club. The story is going to unfold incredibly through episodes 7-10. There’s so much more stuff to see and uncover. FF: Bishop has family ties to the club as well with Alvarez who is convinced there’s a rat at the table. As Bishop starts to get closer to figuring things out, will he keep Alvarez in the loop?

FF: Should fans be worried for CoCo now that he seems to be number one on Bishop’s list?

MI: I do think they should be worried about CoCo. I think the fans should be worried about anybody that they are in love with on the show. In this world, everybody’s under the microscope and everybody is up to no good. At the end of the day, these are Bishop’s brothers. Family always gets an extra card that other people don’t necessarily get. A father can see his son who recently came out of prison and still love him for who he is and who he believes he is. No matter what, with family, you still have to love them for who they are. I think at the end of the day, even if these guys screw up, if it’s for the club and it can elevate what’s best for the club, Bishop will have to take it from there. 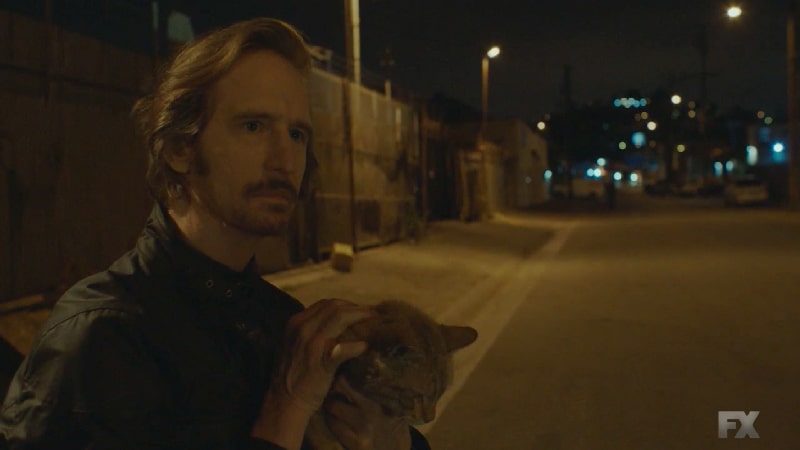 FF: Bishop already has so much going on inside the club, but now things are looming on the outside as well. This past episode had a huge cliffhanger with the return of the popular Son’s antagonist, Lincoln Potter. What can you tease about what’s on the horizon with his arrival?

MI: This guy is back and he’s on a mission. Bishop hasn’t dealt with Potter before, so, this is a new introduction to Bishop’s character. From what I’ve seen in the scripts I’ve read so far, the fans should be pumped if they love Potter. He’s up to no good. He’s peeling back the layers on the onion. It’s not fun and he’s got the squeeze on everybody. He has information that nobody should have and nobody needs to have.

FF: On a series like Mayans, characters tend to tackle things in packs. Together you’re filming fight scenes, bike riding scenes, or just hanging out in the clubhouse. Which of those group scenes are your favorite to film?

MI: Riding with the boys. The night rides are the best. It’s actually that little time we have before the cameras are rolling. We’re all out there and everybody’s sitting on their bikes at something like one o’clock in the morning and we’re together. That’s when you hear the magic and that’s when you hear all those sweet little stories. We’ve been thrown into the type of a lifestyle where we’re with our brothers all the time. So, between the action, those are my favorite times with those boys.

MI: I’ve got to be honest with you – shooting in the cemetery was a thrill. It was righteous, it was a great scene and a lot of gunplay. For me, that was like, day 2. So, we got thrown right into the mix, right into the deep end. I think that was the day that Clayton [Cardenas] skinned up his knee and had to go get a couple of stitches. It was pretty funny because I think at some point he might have accidentally kicked a headstone out there, and JD was like, ‘Bro, you can’t do that, you can’t do that.” And literally, like, twenty minutes later he took a spill and had to go get a few stitches. It’s like, bro – it’s real!

To see a behind-the-scenes breakdown of this headstone situation check out the Mayans MC video below!

Mayans MC is currently airing the back half of its debut season Tuesdays at 10/9c on FX!