Being an artist can be both exhilarating and draining. Creating something fresh and new is a way to express how you feel, but sometimes you have to expose yourself in doing so. After all, your heart and soul is a part of what you have left behind. But in reality, you leave the world better than before when you add that bit of yourself to it.  In this review, I hope to show you just how Concrete Genie accomplishes this on two levels; in the game itself, and in that talented developers of Pixelopus have poured themselves into it.

Concrete Genie’s story is short but sweet. You play as Ash, a creative teen doodling in his notebook as he watches the dark port of Denska. We learn as we continue through the story that it’s been abandoned, that a series of events have tainted this sweet little town. He remembers how things were, but alas, it’s simply the times of old. As he draws, bullies come by him and catch what he’s doing. Grabbing his notebook, they do what they do best, bully. As everything transpires on the screen you can only look in horror as they destroy Ash’s notebook and push him into a tramcar. Locked inside, Ash can only watch as it starts up and carries him to the old deserted lighthouse, which everyone says is haunted.

Everything truly begins right here. Ash starts exploring, only to find a page he just drew carried off by something that definitely isn’t the wind. He follows to find something magical, his art has come to life! Your most recent drawing Luna wants you to start beautifying the lighthouse in order to drive away a dark, corrupting goop that seems to be contaminating everything, including Denska. She even gives you a magic paintbrush in order to do it. You agree and continue to save your home town. The story is sweet as you go along and by the end all the genies you craft are truly your friends. 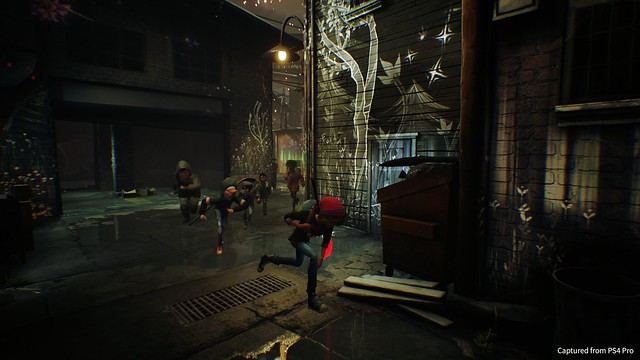 There is a big moral conflict behind Concrete Genie that we mentioned earlier, bullies. Ash spends most of the game running from this group that just wants to make his day horrible. The thing that makes things different in Concrete Genie is they are not just a plot device. Early on in the story one of them grabs your magic brush, and when Ash in return pulls back, he catches a glimpse into their childhood. No spoilers here, but the game makes a point that all bullies aren’t necessarily just bad people. Some have gone through worse things than we would imagine.

I first kind of scoffed at the notion, but there was a moment that I realized I needed to look at the game from Ash’s point of view. Ash has a good home life. His mom checks on him and cares about his well-being. He seems like he’s doing pretty well for himself. When I began to think in those terms, I empathized with the bullies. The only thing I wish Concrete Genie would have done more of is adding to Ash’s and the bullies’ backstories.

There is a huge twist in the game in the third act which drives all of this home. It’s too spoilery for me to approach, but it leads me to this synopsis. Sometimes you must save the things you love, but that doesn’t always mean destroying something in the process. You have the option to reach out and save them.

I also like another feature of the game, newspapers. Their use in the telling of what happened in Denska adds a new element to the story. While I know I never found them all, Each one tells you just a little bit about why people left what once was a promising harbor town. It’s enough to make one sad the amount of trouble Denska has endured.

This leads us to the reason you probably are curious about Concrete Genie, the gameplay. Denska is made up of several open areas you are going to have to paint to bring the town back to life. Speaking of painting, that is the other thing you want to know about in this game. Painting is very simple. 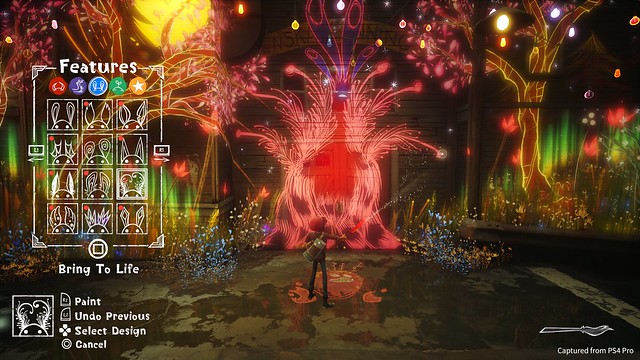 This isn’t a game where you’re actually painting a full picture. You have specific “stickers” so to speak that you will put onto walls. When you collect new pages, you learn new patterns or items to paint. It’s up to you to select what goes up. Once you do that you aim (Making use of the Sixaxis of the PS4 controller) at the area you want to paint and press R2. If you move the reticle in the direction you want, you can change the shape of what you’re painting. For me, I appreciate this styling, although some may wish for more control. Anything I draw generally looks ugly, so knowing I can just “adjust” what is being painted is perfect for me. This also makes it a perfect game for the family in that just about anyone can do it.

This isn’t all you’re going to do. The bullies add the element of stealth to the game in having to avoid them. You also have open-world trappings in the climbing to different areas to paint and search for new pages. If you want to finish each area, you have to light up strings of bulbs by painting near them. While I at first didn’t understand the map, it’s easy to learn what you have done and what you haven’t. Every once in a while you need the help of genies to progress in areas besides just painting on the lights. There are three different types of genies, fire, electric, and wind. There are different environmental puzzles you’ll need their help with if you want to beautify Denska.

The genies will also ask you to paint specific things on the walls they are on. They will in turn gift you Super Paint, which you can use to clear the walls of the icky darkness keeping the genies away and corrupting Denska. The genies are just so brought to life so well by Pixelopus. They will play games with you, interact with your other drawings, and lend you that helping hand when you need it. They are truly one of the stars of the game.

Once you make it to the third act, there is a major twist in the gameplay. You actually have to fight corrupted genies. The game becomes somewhat of a third-person shooter/caster in this regard. You have a few different new abilities at this juncture, and all are needed to help in rescuing your friends. There is Paint Skating, a fast way of traversal to catch up with the genies. You can call bullies to help you daze the genies with flashlights. Most importantly, you learn to use the three different projectiles you have to defeat the genies. Each is modeled after the genie’s abilities, fire, electric, and wind. The first does the most damage, electric can stun, and wind helps to down flying genies. It’s honestly a complex fighting mechanic made easy by clever development.

What I can say about my time playing Concrete Genie is that it plays phenomenally. There isn’t any stutter in framerate, nothing to complain about in controls. While the Sixaxis control for painting can seem a bit forced, I don’t see any other way you could give the illusion of painting without it. Also, using that for painting is way easier than an analog stick. Everything works as it should, which can’t always be said about a game at launch nowadays.

Before we jump into graphics and soundtrack I want to touch on the PSVR modes. The game includes two and makes you start with a little adventure with Splotch, your paint buddy from the main story. You go below the lighthouse in order to unearth a mysterious power. While quite short I really enjoyed it. You simply follow the same idea as the painting with the main game. As you progress, you get more patterns and items to draw. It even jumped into a 3D painting area which was really awesome to experience. Painting different things for Splotch was simply enchanting.

The second of the two modes was free painting, and while still fun it doesn’t match up to the previous one. It’s simply going to several different areas and applying your paint “stickers” to the walls. It looks cool in VR, but after a little bit, it gets repetitive. I hope maybe in the future we may see an update that might enable actual “painting” in these spaces. I feel that would add to the allure of said mode. 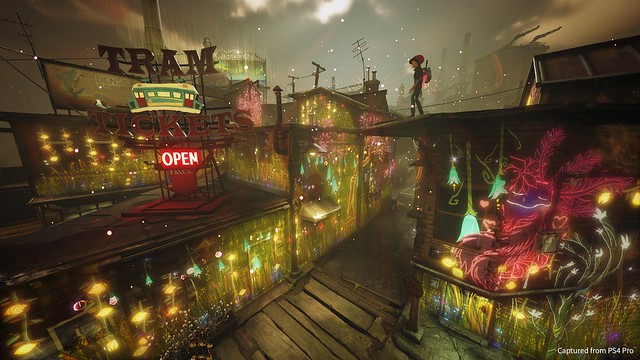 This is something I feel no PlayStation exclusive ever truly lacks in. Concrete Genie, even at only $29.99, still packs everything you would expect from a Sony first-party game. Denksa is hauntingly beautiful. The walls come to life as you let your paint sweep across them. The genies react so perfectly and remind me of something from “Where The Wild Things Are”. The almost claymation design in the way Ash and company look and speak is charming and add to the feel of the game. I don’t want or need something realistic here. This fantasy is a world of pure imagination.

The soundtrack is minimalistic but fits the game wonderfully. I love the piano and strings mixed with a few electronic sounds. The flute gives it all that whimsical adventure feel we love having, and the piano will always draw some emotion from me. The soundtrack is perfect for Concrete Genie.

Concrete Genie is something special. It’s not the largest game, but it builds something bigger than what it is. It takes a real issue and reminds us of what matters. It fuses charming gameplay into an art form. In any case, it makes me want to play it again and makes me hope for a sequel. While you are limited in your control of the painting, that’s not a dealbreaker. Too much control would take away from the heart of the game. It gives you the ability to create, to love, and to save. The last act’s gameplay twists threw me for a loop and shows the versatility of Pixelopus. Then you have two PSVR modes thrown in as a bonus? And all for thirty bucks?

I urge you, please give Concrete Genie a try. You won’t regret one second of this enchanting adventure.