The Walking Dead often has a thing for letters. There was Enid’s JSS:

The “W” that the Wolves used as a mark:

However, there hasn’t been a letter that’s popped up on the show as much as the letter ‘A’ has and last night’s episode of “The King, the Widow, and Rick” added one more to the fire for us to theorize over.

We saw Rick make the risky decision to head to the Jadis & the Heapsters in hopes that they would once again join his fight against the Saviors, despite the fact that they betrayed him in the Season 7 finale. Jadis didn’t take his proposition and instead takes him hostage, throwing him in a storage container that she marks with an ‘A’.

Now, this isn’t the first time that Rick has found himself locked in a container marked with an ‘A’, in fact,  the first introduction of it was in season 5 at Terminus where Rick & Co. were captured by the termites and thrown in train car A. The ‘A’ turned up again later after the group had escaped Terminus and were taking refuge in Father Gabriel’s church. In 5×03 “Four Walls and a Roof” Termite leader Gareth marks the church with an ‘A’ to taunt Rick and the other survivors, reminding them that they were still cattle waiting to be slaughtered. Of course, our group outsmarted them and turned the tables so the Termites were the ones who ended up walking into their deaths. That didn’t mark the end of the ‘A’ though. When the survivors find their way into the Alexandria Safe-Zone, Rick and Jessie both receive red ‘A’ stamps on their hands from Jessie’s son Sam. 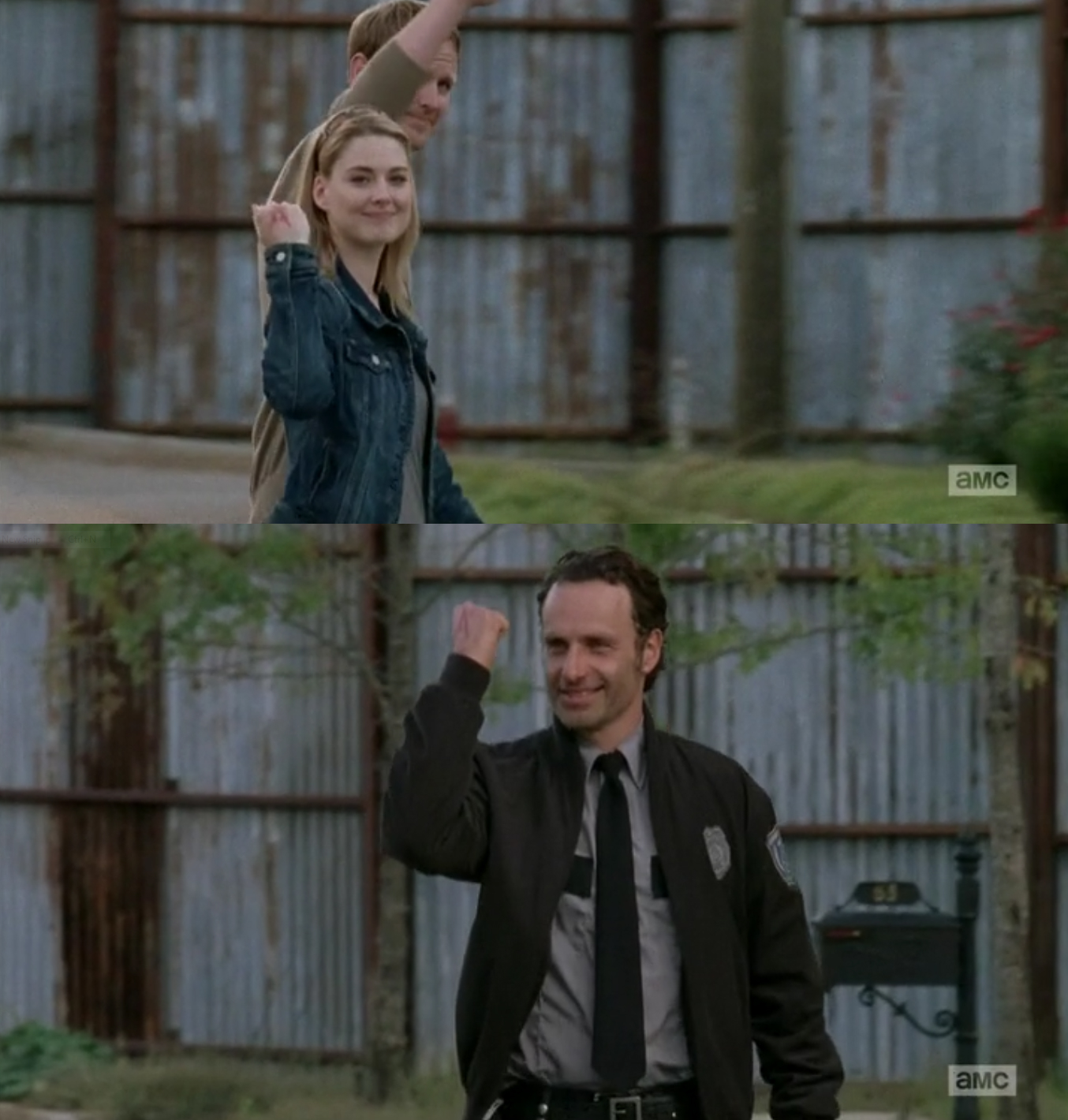 This one wasn’t too hard to figure out as literature fans know that this was most likely an homage to The Scarlett Letter, referring to Rick’s blossoming relationship with Jessie despite the fact that she was married to Pete. Sam also puts an ‘A’ stamp on Carol’s porch in Alexandria. So unlike the ‘A’ in Terminus and Father Gabriel’s church, which symbolized being trapped and controlled, the Alexandria ‘A’ stamp stood for unity and hope. However, that wouldn’t last for long because Season 7 found Daryl captured and tortured by the Saviors wearing a sweatsuit marked with the letter ‘A’ once more. There were certainly some Terminus undertones to Daryl’s ‘A’ but Walking Dead writer Angela Kang said on the Season 7 DVD commentary:

“Randomly people ask me all the time if the ‘A’ stands for anything, and I was like it just means ‘asshole’. They’re being juvenile. Like an asshole and an ‘F’ and ‘S’ for f–ckace and s–thead.”

You could see on the show that other prisoners were wearing different letters that supported this statement, but it just seems too intentional that Daryl would be wearing an ‘A’ if it didn’t stand for something larger in The Walking Dead universe. 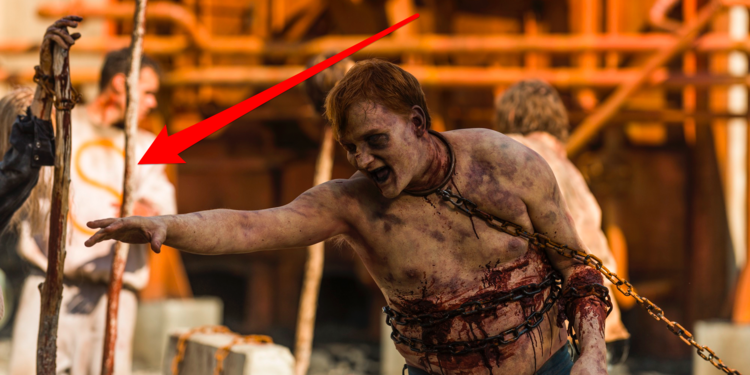 So, why did Jadis write an ‘A’ on Rick’s storage container? There are a few theories floating around, one of which states that somehow Jadis was connected to Terminus. First of all, Rick is locked in the container with his hands bound and completely stripped of his clothes except for his boxers. Now, while Jadis has said she wanted to “lay with” Rick in the past this was probably not a decision meant to get Rick sans clothing, but could be because of the the fact that Rick and the other survivors used anything they could find on their persons (belt bucklers, shoelaces, etc.) to make weapons out of their Terminus train car.

Also, Jadis was wearing Rick’s boots, which was another tactic that the Termites used and is what made Rick realize that they were not the “sanctuary” they appeared to be. He noticed one of the Termites wearing the poncho that Maggie had on and they also had Glenn’s pocket watch and armor. So, perhaps if Jadis was a member of Terminus, she is still stealing from her prisoners and if Rick doesn’t show up to his meeting point, her wearing his boots will be a good hint to whoever comes looking for him that the Heapster’s are in fact holding him hostage. ** Another theory features a storyline from the comic book so if you do not want to be potentially spoiled please skip ahead. **

The next theory believes that Jadis could be a version of an antagonist in the comics known as Alpha, who is the leader of a group known as The Whisperers- survivors who walk around dressed in walker skin, speaking in whispers. This wouldn’t be too far off from the already abbreviated language the Heapsters already speak.

Time-wise, the introduction of The Whisperers isn’t too far off as they are introduced in volume 22 of the comics and the All Out War occurs in volume 20. Aside from the ‘A’ that Jadis draws, this theory is a bit of a stretch since as of now her character doesn’t appear in the comics at all, but if it is true it seems that Jadis could play a much bigger part than anyone initially thought.

Or, it could just mean something completely literal as one of our readers pointed out on Twitter:

If you look at the photo closely, and take it literally: “A hole” 😂

While the bigger purpose, if any, of the ‘A’ still remains to be seen, it’s safe to say that it is certainly important to the fans of the show so hopefully soon we will get an answer.

This show is making me hate the letter A.#TheWalkingDead

Why is the letter “A” so scary?!? #TheWalkingDead

Why do they always use the letter A?? #TheWalkingDead

Apparently Jadis isn’t aware of how things go down when you lock Rick in a container with a large letter “A” on it. (Season 4: Episode 16) pic.twitter.com/d9CtLhLlWr

What’s your theory on the “A”?

‘The Walking Dead’: The Best Tweets from “The King, the Widow, and Rick”

If Anyone Can Get Out of a Bad Situation, It’s Rick Grimes

‘The Walking Dead’: Craziest Weapons Used Throughout the Series

‘The Walking Dead’ Review: The King, the Widow, and Rick